Our team here at LRF Maintenance, Heating & Cooling is happy to offer the people of New Albany, Ohio, the best local Heating, Cooling, and Indoor Air Quality products and services at the most competitive prices in the local market. We’ve been in this business since 1975, earning the trust of countless central Ohio area homeowners to become a distinguished local HVAC company built on family values.

Getting to Know New Albany, OH

New Albany is a Franklin County city with a small portion of itself extending into the adjacent Licking County. It is located 15 miles northeast of Columbus. In 2019, New Albany had a population of about 10,933 people. First settled in 1837, New Albany has become a growing suburb in the Columbus area, with a unique economy.

Established in the center of Plain Township, the land that would soon become New Albany was split into lots of 50 by 100 feet, and sold to new settlers. A common belief held about the town’s name “New Albany” is that many of the original settlers migrated there from Albany, New York. Having said that, during New Albany’s early years, the community was called “Hope.”

With an early population of 50 people, in 1856, New Albany was incorporated and its first mayor, Mayor S. Ogden was elected. In 1881, the Wilkins Lumber Mill, later named the New Albany Mill, opened. Then, in 1922, Mrs. Edward Babbitt was elected as the first female mayor of New Albany.

As late as 1980, the census listed only had 414 residents living in the village. However, rapid growth in the area took place in the 1990s, in part because of the expansion of the Les Wexner clothing empire and the major construction of his mansion, which is the second-largest mansion in central Ohio, second only to the Longaberger mansion. It is located off Kitzmiller Road in the village. Around this same time, State Route 161 and access to 161 from I-270 were redeveloped providing freeway access in and out of the town.

Then, in 2008, the New Albany Mill was closed 119 years after its opening downtown. The original sawmill was rehabilitated into a hardware store that became a staple in the lives of countless residents of New Albany.

New Albany is located at the headwaters of the Rocky Fork, a tributary of the Big Walnut Creek. Sugar Run and Rose Run, both tributaries of the Rocky Fork, flow from the northeast to the southwest through New Albany. Blacklick Creek runs through the eastern side of the city.

Do you need HVAC services in New Albany, OH? Choose LRF Maintenance! Day in and day out, our HVAC service vehicles arrive as scheduled, calling ahead to let each customer know we’re on our way; our vehicles stay fully furnished with the latest HVAC (heating and air) equipment and the latest in technology. We carry a wide range of HVAC system filters, furnace filters, central air filters, HEPA filters and more. We carry the latest technology in thermostats, smart thermostats and programmable thermostats, which are popular upgrades that pay for themselves quickly. Smart thermostats are extra convenient and smart home friendly and WiFi friendly, and accessible from your smartphone. Make your Lewis Center, OH home more comfortable with a humidifier installation from LRF Maintenance!

Five Star Heating & Cooling Group Rated 5.0 out of 5 stars based on 23 customer reviews

Called for a repair service on our humidifier and they were at my house in less than 4 hours. Corey our technician was very courteous and fixed the problem while also explaining the source of the issue.

Everything went well. Very knowledgeable technician who shared some good tips and was very patient in answering questions! Very satisfied with the service!!

The repair technician was very polite and on time. Put dust cover on shoes which I appreciate

Ben Johnson is a plus for the image of your company going forward.

Have used before and always satisfied.

My overall experience has been excellent with Pickerington Heating and Cooling. Very professional and courteous. They arrived on time and were very friendly and knowledgeable. The two took the time to also explain every question that I had and offer very great advice.

Use them every time for HVAC needs

I am very pleased with the service from Pickerington Heating and Cooling. I highly recommend.

I completed a diagnostic on a Lennox AC unit. I found the filter was dirty, which was causing the unit to freeze. I changed the filter and ran the system. The system is cooling properly ant this time. 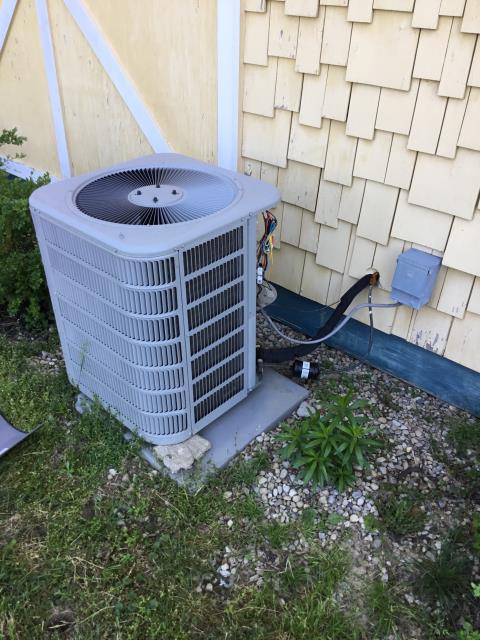 Upon arrival I went through tune-up checklist and confirmed that system is working within manufacturers specifications. The system heating properly upon departure. 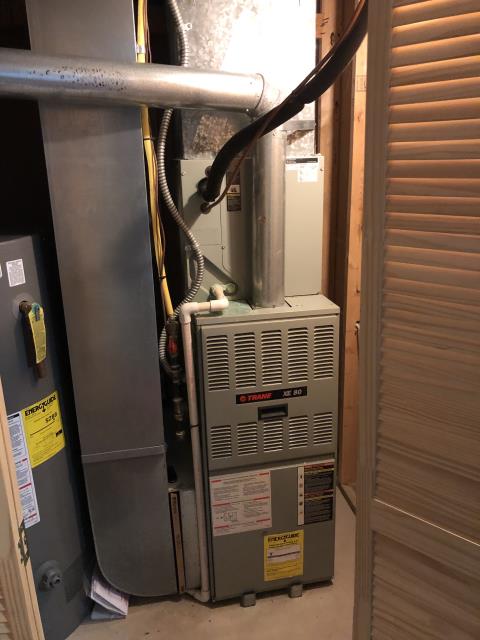 I completed the scheduled maintenance agreement heating tune up on a Carrier gas furnace. I visually inspected the unit. Checked voltages, amps and pressures. Completed combustion analysis. Cycled and monitored system. Operating normally at this time. Do not have a photo of the furnace.

I completed a heating safety tune up on a York gas furnace. I visually inspected the unit. Checked voltages, amps and pressures. Completed combustion analysis. Cycled and monitored system. Operating normally at this time. 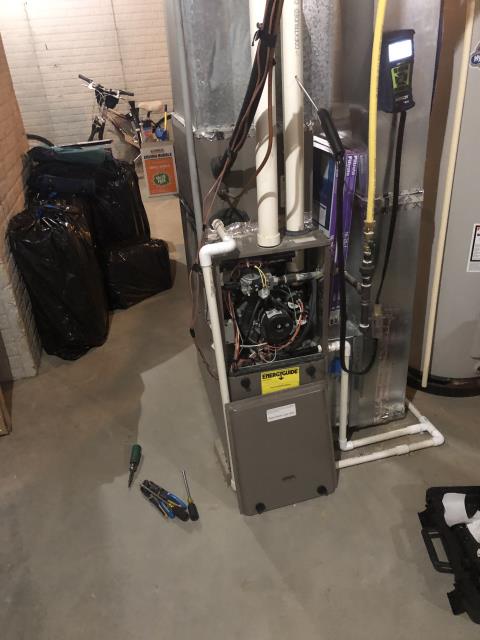 I completed a heating tune up on a Rheem gas furnace. I visually inspected the unit. Checked voltages, amps and pressures. Completed combustion analysis. Cycled and monitored system. Operating normally at this time. 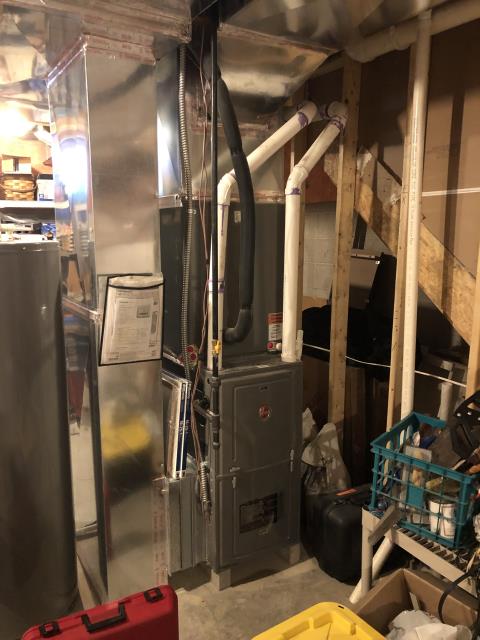 I completed a heating tune up on a Bryant gas furnace. I visually inspected the unit. Checked voltages, amps and pressures. Completed combustion analysis. Cycled and monitored system. Operating normally at this time. 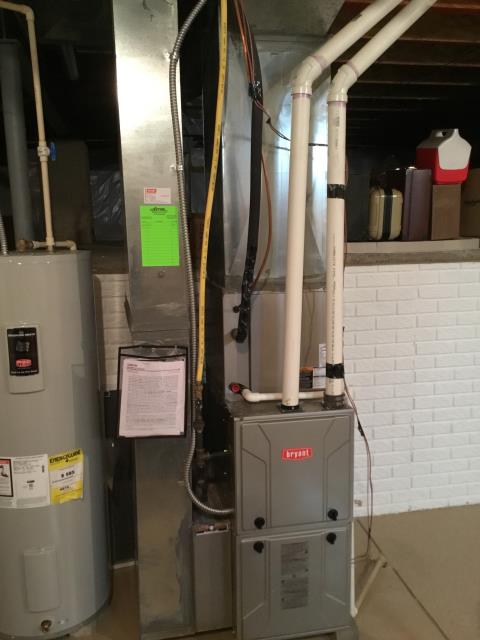 I completed the scheduled maintenance agreement heating tune up on a Bryant gas furnace. I visually inspected the unit. Checked voltages, amps and pressures. Completed combustion analysis. Cycled and monitored system. Operating normally at this time. 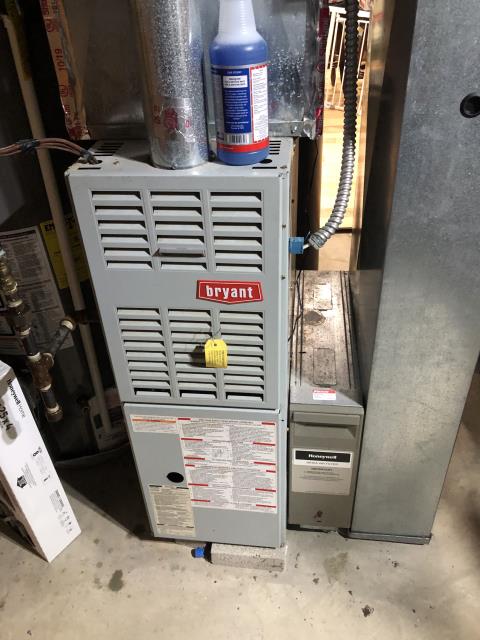 I completed a service call. Upon arrival customer stated AC unit was not cooling the home. After switching the CFM to 700 system is now cooling like it should. 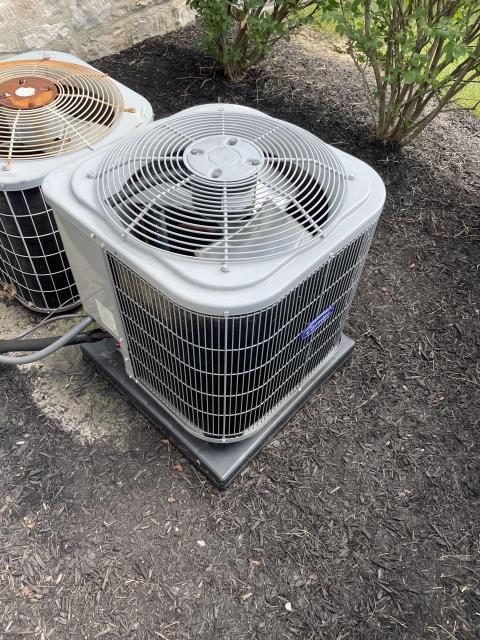 I completed a callback service. I found the system was low on Freon. I added 3 pounds of Freon. System is operational upon departure.